Where Were You 40 Years Ago When President Nixon Was Being Impeached? 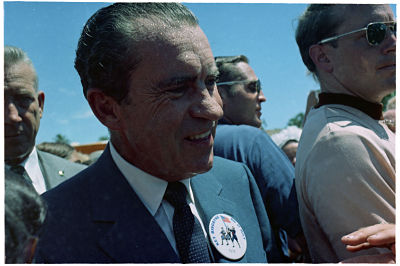 Forty years ago this week President Nixon was in the process of being impeached and led to his public resignation. It was one of the few times a president of the United States, the most powerful man in our country, has been removed from office. Technically he resigned but the vote had already started. Everyone involved was uncertain, scared, or both in the shadow of uncertainty that our country was standing in.

What would happen in our country? Would our experiment of democracy be challenged? Yes. Would it succeed? Would it crumble? Could something like removing a leader of such great power happen peacefully for one of the few and maybe first times in history? The answer was yes but the experience left a mark on our country as a group and as individuals.

Forty years ago I was 6 years old, waiting for summer vacation to end and getting ready for the first grade to start. My biggest concern was that I would have to go to school all day and not just in the morning like I did in kindergarten, but for my parents and many others it was one of those days they will never forget, nor should they.

Our democracy is far from perfect but it is ours.

It is all we have. Helle C. Dale talks about the Great Experiment, as it has been called an experiment by many. Our founding fathers knew it when they signed the Declaration of Independence. President Lincoln expressed it in less than four minutes at the consecration of the Gettysburg memorial. Over and over again we have been tested to see if we, as a nation, as individuals, would defend the sacred fires of liberty or would we let them go out. Could we do it?

That has been the experiment and in August of 1974 we succeeded one more time. There were no riots, no military uprising and no attempt on President Nixon’s part to take matters into his own hands and seize power forcibly. When it was all said and done we survived.

The night of his resignation another experiment was happening.

NPR was attempting the largest call in radio show ever. People from all over the world called in that night to express their thoughts. Unlike the reality drama of today these people shared their thoughts, concerns and hopes for the future with thoughtfulness and amazing optimism. It was like a giant family meeting reaching from coast to coast where we grieved together and wondered what would happen next.

Over the last 40 years that encompasses most of my life, we have seen more change, more discovery and been given more information than ever before in history. The idea of democracy is continuing to be tested but it occurs to me that every idea of governance is going through the same exact thing. I am incredibly grateful for our country and our democracy. I do not think it works perfectly but it is, in my opinion something very precious. I am thankful for the opportunity to be a part of this democracy and to be a part of the experiment.

By the very nature of the experiment we have been given the choice to either pick up the sacred flame of liberty or to ignore it; to either become the stewards of this experiment called democracy or to sit idly by and give no support, no direction to our community or to our country as the flame quietly goes out. If we choose the latter the flame will dwindle and the experiment will fall into history, but if we do what has happened so many times before we will rise again to protect and pass our democracy onto our children’s children.

Democracy isn’t perfect and neither are we. President Nixon failed, he got caught and then we were faced with one more difficult choice. We had the choice to either go forward and find our way through the mess or to give up hope, to give up on democracy. America chose hope and today that encourages me.

I am inspired by the words of Tocqueville, a 19th century writer when he wrote, “The greatness of America lies not in being more enlightened than any other nation, but rather in her ability to repair her faults.”

Do you remember President Nixon's resignation? What are you thoughts on this experiment we call democracy? Please share in the comments section below.