The Real Cost of Buying Followers on Social Media

Social media can sometimes be a popularity contest. Everyone is screaming for attention and there is strength in numbers. The influence of a social media profile can be measured by its number of followers. A huge number of followers implies credibility and certain social media “Influencers” even make money from their popularity via product endorsements. There has been a race to build followers and some people have found a shortcut, but at what cost?

Initially the cost sounds low, about a penny per follower if you buy in bulk. The problem is that the majority of these followers are either fake or stolen accounts run by automated programs called “bots”. Twitter is the most susceptible to this problem because there is little monitoring and regulation. They allow accounts that don’t represent real people. While social platforms prohibit buying followers, there is no legal regulation about buying followers from third party companies that promise internet fame.

All bots are not necessarily bad. There are practical reasons to allow accounts run by bots. They can be used to relay urgent messages like earthquake or tsunami warnings, they can be used in customer service applications to communicate via chat and answer common customer questions, they can even keep you up to date on your favorite sports team's score. But this is not a story about good bots… 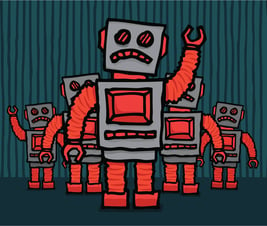 A recent article in the New York Times investigates this practice with a focus on Devumi, a company that is responsible for somewhere around 3.5 million fake social media accounts which are automated and run by bots. In many cases they re-appropriate the identity of real people causing frustration and embarrassment for those users. Devumi has made millions of dollars selling followers and re-tweets to anyone looking to boost their profile.

“Fake accounts, deployed by governments, criminals and entrepreneurs, now infest social media networks. By some calculations, as many as 48 million of Twitter’s reported active users — nearly 15 percent — are automated accounts designed to simulate real people, though the company claims that number is far lower.

In November, Facebook disclosed to investors that it had at least twice as many fake users as it previously estimated, indicating that up to 60 million automated accounts may roam the world’s largest social media platform. These fake accounts, known as bots, can help sway advertising audiences and reshape political debates. They can defraud businesses and ruin reputations. Yet their creation and sale fall into a legal gray zone."

The article goes on to say:

“For some entertainers and entrepreneurs, this virtual status is a real-world currency. Follower counts on social networks help determine who will hire them, how much they are paid for bookings or endorsements, even how potential customers evaluate their businesses or products.”

This article sheds light on a growing problem that has been around for years, but just hit the public consciousness over the last year due to high profile political and social issues involving fake social media accounts. Social media has taken the place of traditional news in many ways, but with limited safeguards or fact checking. The rising value of followers, likes and retweets as social currency has created a huge industry for bots that can run simple automations and boost a profile by thousands of followers in a very short time.

The goal of those who bought followers was to gain credibility, raise their public profile and increase their reach. In some cases this may even deliver some short term success. The crowd mentality will cause some people to view an account with 5,000 followers and say “Wow, this must be an account worth following”. However, as the veil is lifted off of shady practices like this, there is bound to be a backlash. This NY Times article named several high-profile celebrities and politicians who had bought followers from Devumi. This puts their credibility at risk and real followers are likely to start dropping off their accounts. As social platforms like Facebook crack down on fake accounts, those bot accounts will be identified and deleted. Meaning the followers you paid for no longer exist.

Just like website SEO there are easy ways to buy traffic. These deliver a quick but empty win. You can show your boss a great report on site traffic, but it won’t convert and become revenue.

On social media you have to focus on good content. Not just content that helps you sell your product, but content that your ideal customer wants to consume. Inform them, entertain them, answer their questions and speak to their needs. The long-term health of your social strategy is built on connecting with real people. Bots are good at being followers, but they never buy products or services. If you are going to spend time and money on social media, there should be a real world return on that investment.

At Half a Bubble Out we keep up on social media trends and shifts in the digital landscape. Your social media marketing strategy that was successful last year, could fall flat this year if you aren’t aware of changes like Facebooks recent re-tooling of their News Feed algorithm. If you are struggling with your company’s approach to social media or other forms of digital marketing please reach out to us to see how we can help.