During this season of COVID-19 and sheltering in place, our team is working remotely. We are “open for business” and serving our clients and friends.
Please let us know if there is anything we can help you with.

Amazing leaders in history have always understood that their role as a leader is to contribute to the world and to others. They know and they’ve worked at knowing who they are and what they can contribute – you can’t be a great leader without knowing that, especially if you want to have a successful small business.

Among the more notable business leaders in recent history are Steve Jobs, Richard Branson, Warren Buffet, Donald Trump…and Michael Scott? The thing is, you can be in a position of leadership and not lead well. This is the fault of Michael Scott. You know the one. The manager of Dunder Mifflin Paper Company on the hit show “The Office.” As much as we might like – err put up with – Michael Scott as a person (or as much as he likes himself!) he sucks as a leader. 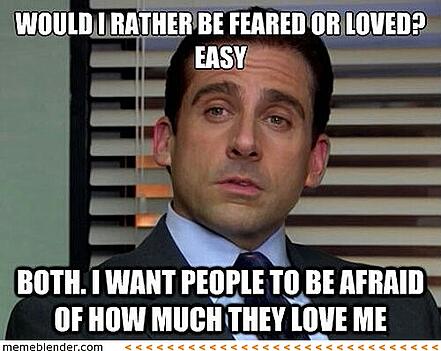 Part of having a Passion & Provision Company is understanding what leadership is and learning how to do it well. If you’re a fan of “The Office” you’ll have no trouble at all picturing the following scenario; if you’ve never seen the show, let’s set the stage.

It’s just another day at the office – or so it seems. You walk in and receive a warm “good morning” from Pam at the reception desk. You pass by Jim and Dwight at their sales desks, Dwight already trying to convince Jim of the alien abduction that occurred on his farm the night before. Jim rolls his eyes and asks Dwight how he really knows he wasn’t abducted. That will keep Dwight busy the rest of the day. You also notice on your way in that manager Michael Scott’s office is dark because he isn’t in there – typical. He’s probably off busy with his normal shenanigans. Take a look to get an idea of what he may be up to:

“I want people to be afraid of how much they love me.”

“I worked at a fast-food restaurant to save up money for school. And then I lost it in a pyramid scheme.”

“I told Dwight there was honor in losing, which we all know is completely ridiculous.”

The only conclusion we can make is that he’s self-absorbed, unaware of other’s feelings, clueless, and completely inappropriate in the workplace. Of course, he thinks he’s brilliant.

He’s fallen victim to the leadership myth: Position is leadership.

In other words, if you’re in a position of authority, that must mean you’re a leader. But as we see through Michael Scott this absolutely is not the case.

Michael Scott does not have:

All of these are needed for personal leadership development and to run a successful small business. In one word, it’s resolve. A company with a great leader has clarity and insight. If you have great resolve in something that isn’t true – like all the great qualities Michael Scott believes about himself – then the company won’t last.

Companies rise and fall on good leadership. The quality and values of the leader radically impact a company’s culture, efficiency, direction and ultimately, success. Leadership is a key attribute to having a passion and provision company. If this is something that you want to have in your company, contact us at Half a Bubble Out. We can help you understand what it looks and feels like to truly be a good leader of a successful small business.

• Why Our Clients Use Us

• Our Values, Beliefs, and Quirks

• What’s With Our Name

Half a Bubble Out
Marketing, Advertising and Consulting