How to Properly and Effectively Use Hashtags On Social Media 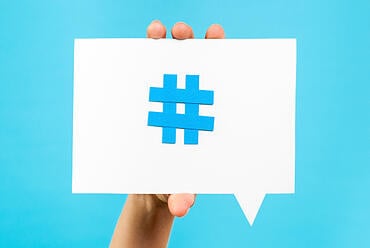 Hashtags are common day knowledge in our world anymore. We see them on social media networks like Twitter, Facebook and Instagram. And lately they are even making it into conversations, most of the time as a joke or making fun of something; regardless, they are becoming more and more common in our language, virtual world or not.

If you're that small percentage that is still wondering what a hashtag is, don’t worry we won’t tell on you. We’re here to help! So, what is a hashtag?

A hashtag is a word of phrase preceded by a pound sign or hashtag sign (#) and is used to help categorize certain topics in social media networks.

Ok, now that you are looped in we can continue on! Don’t you feel so much better now that you know why all these people have been using that silly # sign. There’s a reason—but it’s definitely abused A LOT!

Where do you use hashtags?

Hashtags are used in the following social networking sites:

In each platform they are used a little differently but have the same purpose—to help categorize that social media message with others that have the same hashtag so that they can be found in a search.

What hashtags do you use?

What hashtags you use [for business] depend on what industry you are in. Using them for personal posts is different and this is where the crazy, made-up hashtags come from like #sorrynotsorry or #butfirstletmetakeaselfie. However, we’re going to discuss how to use them for business. Here’s an example:

If you're an industry in internet marketing some hashtags you may use to go along with your posts are: #internetmarketing, #SEO, #socialmedia, #inbound, #linkbuilding and so on.

TIP: Just make sure when you are using hashtags in your social media post that it actually pertains to what you are posting about. So, if you are posting a photo on Instagram for example, and that photo is from a marketing conference that you are at make sure you use appropriate hashtags to go along with it. DO NOT use hashtags that are trending and completely unrelated in your post just so your post will be seen more. That’s spammy and considered bad hashtag etiquette.

Take a look at this blog post by Jeff Bullas that goes deeper into the methods of how you choose what words to use and how to test your hashtags to see if they are working for you! #GoodLuck #HashtagOn #JustKidding

In case you hadn’t noticed, the hashtag has pretty much taken over social media.

With sites like Twitter, Facebook, Tumblr, and Instagram all using this format to organize content, it should be clear that this once forgotten character on the keyboard has finally made the big time. According to some research by Buddy Media (and mentioned on the Buffer app blog), one lonely hashtag can increase engagement by 100%!

Unfortunately, there are a lot of people out there who just don’t seem to understand the new trend. They misuse the organizational tool thinking that it is simply a means of attracting attention to their content. While the hashtag can serve this purpose, using it improperly isn’t going to help you at all.

Here are some tips on how to effectively make use of hashtags in your social media marketing.

The hashtag isn’t meant to be used for every word in your post. The point of this little character is simply to organize content and make it easier to find. For example, if someone wants to find news about their favorite basketball team, they might search for #NBA, but they probably aren’t going to search #basket or #ball.

Using either of those terms is likely to pull up multiple results that aren’t even related to the sport they are looking for. Hashtags are typically very focused, meaning that simple and frequently used words don’t usually make the cut. But how do you know just what to say in order to send the most effective message? By testing.

Most brands that take advantage of this social media tool spend some time testing their hashtags. Even the White House media team tested 26 different possibilities before one of the President’s State of the Union addresses, eventually settling on the 7 most successful messages.

It will be important to test each social media platform you intend to use and see for yourself what resonates the best with your customers. In addition to testing, you can also search each social media website for hashtags and look for the most effective words.

That being said, it should be noted that each site has a vastly different user base and you will do better to target each market individually whenever possible.

[Read the original article: How to Use the Power of Hashtags in Your Social Media Marketing]

Internet Marketing Tips: 5 Ways to Use Hashtags & Annoy the Heck Out of People