Watch out Snapchat, your evil, more snazzy twin Slingshot is here! Not really though. Facebook recently released a new app that is very similar to Snapchat. However, after trying out Slingshot I'm aftraid to say, that in my opinion, it's a bust. All of my fellow employees back me up as well!

I downloaded it and went through the tutorial process. Here’s screenshots of the tutorial so you can decide for yourself if you want to go download it as well. Just know, it hasn’t really picked up quite yet, because it just came out, but I would predict that it still won’t be that popular. Upon downloading it none of my Facebook friends were on there, but I will say it’s only the second day of being out.

People are pretty hooked on Snapchat and I don’t see them abandoning that app to use this one—although it does have some neat features. On the other side of it, those snazzy, neat features may not be reacted to as "neat" at all. Keep reading to see what I mean.

I started out with the classic selfie and then tried out the drawing pen:

*Note: There are no filter options like on the new Snapchat or on Instagram. au naturale, baby!

I already had a "sling" from the Slingshot crew but in order to open it you have to send one first. That's the catch ladies and gentlemen. If you want something you must give something first! I have a feeling a lot of people aren't going to like that! Are people really going to be willing to give to receive? 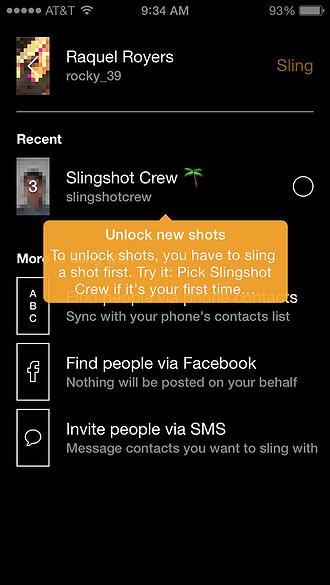 After sending my sling, I received their sling. In which the app then documented my reaction. "Ah! I don't like this," was my original thought...and still is! At least Snapchat gives you the option to provide a reaction and doesn't make it mandatory. 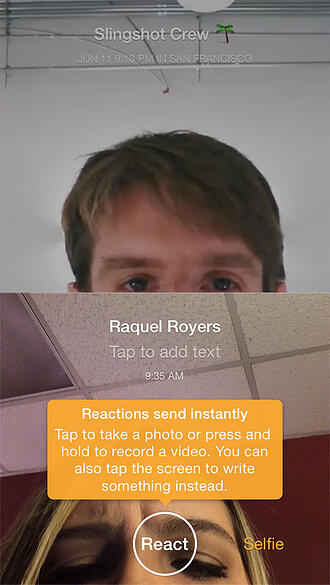 Your reaction to that person's sling is then sent to them. Which in my case was a confused face, not knowing I was even being filmed or snapped or slinged, whatever the heck you want to call it. This is where you want to BEWARE! Just know as you view someone's photo your reaction WILL be sent to them, whether you like it or not.

After going through the tutorial I had a few of my officemates download the app and play along. It didn't go over too well. It was either too confusing, too creepy or just not cool. At least that was the general consensus around here.

Here’s what the crew at Slingshot said on their blog about the app upon releasing it:

“With Slingshot, we wanted to build something where everybody is a creator and nobody is just a spectator. When everyone participates, there’s less pressure, more creativity and even the little things in life can turn into awesome shared experiences. This is what Slingshot is all about."

"Photos and videos that don’t stick around forever allow for sharing that’s more expressive, raw and spontaneous. We can connect the same way we like to live: in the moment. We’ve enjoyed using Snapchat to send each other ephemeral messages and expect there to be a variety of apps that explore this new way of sharing. With Slingshot, we saw an opportunity to create something new and different: a space where you can share everyday moments with lots of people at once."

"To get started on Slingshot, shoot a photo or video. It can be what you’re up to, who you’re with or a quick selfie. Add some text and color, then sling it to a bunch of friends. Here’s the deal: friends won’t be able to see your shot until they sling something back to you. They can then reply with a reaction—or simply swipe your shot away.”

Read more to check out the tutorial video: Slingshot Blog

Well, what are your thoughts? Will you check it out? Will you become a slinger?