Batkid is dominating feeds, blogs, and the news! How far has his hashtag gone, and where will it be at the end of the day? No one knows, but what we do know is we had to blog about this amazing heartwarming story, about a little boy who got his wish.

We have inside information from a Gotham City informant that Batkid’s real identity is Miles – a shy kindergartner. Miles is a hero in his own right, battling Leukemia and beating an awful disease.

This superhero’s mom reveals “He likes to be a superhero...He is one."

As part of the National Make-a-Wish Foundation, Miles was transformed at 10 a.m. this morning into “Batkid.” Adorning a mask, cape, and puffy fake muscles he exited the batmobile, from the front of a two-person sportscar.

After jumping off a trampoline, “Batkid” found a damsel in distress sitting on the cable car tracks on Hyde Street. Explosives strapped to her back and a bandana around her mouth. Batkid saved the day, and the damsel. Crowds went wild and a Batkid star was born.

The World's Response to Batkid, or Should We Say Social World?

Our office is literally drooling over the Hashtag action #Batkid is getting on Twitter. Not to mention the live news feeds and Facebook posts pouring out over the internet and news. Obviously people love superheros and absolutely love little kids who overcome big obstacles, so it’s no shock that America has found a special place in their hearts for Batkid. After all who wouldn’t want to be a superhero for a day? 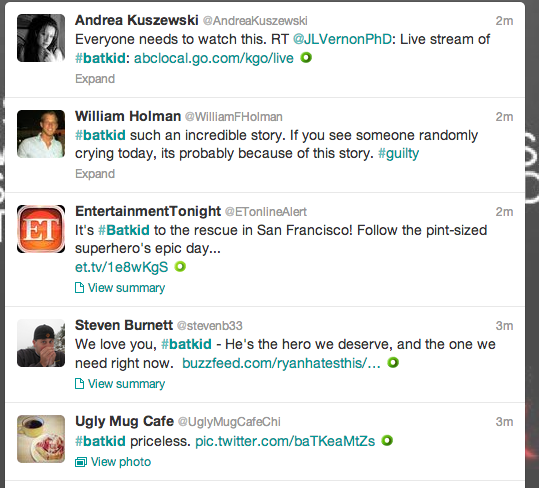 How Did All of This Attention Start?

Make-A-Wish Greater Bay Area Foundation sent out in October asking for volunteers to help give little Miles his wish.

The Timeline: Email went out asking for volunteers. Email went viral, and now there are 11,000 to 12,000 volunteers helping with Miles’ wish. WOW!

The Marketing Aftermath of Social Media:

#Batkid About 9,380 results in Google Search

Stories: A number of supporters from around the U.S. have told Make-a-Wish they'll be flying to San Francisco just to participate.

"As soon as my husband and I heard about this on our radio, we got online and ordered our airline tickets," wrote a retired teacher from Akron, Ohio. "This is the first time we've ever heard of anything like this."

Foursquare will be letting participants check in to "Gotham City" on the day. Several Facebook users set up a Batkid page. The Penguin is taunting Batkid on his new account, run by award-winning social media agency Clever Girls Collective.