Internet Marketing Tips | What is a Meme? 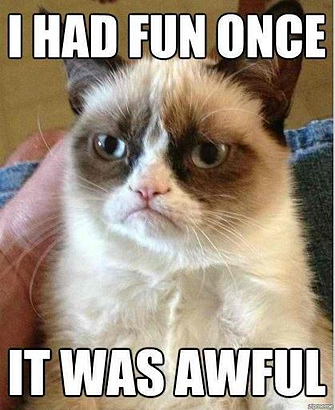 The other day at our staff barbecue the topic of memes came up. Yes, we’re internet marketing geeks and talk about things like memes at our get-togethers. The question was posed: what is a meme? You know what? I'm ashamed to admit that I couldn’t really define it, at least not clearly and neither could anyone else! So of course I had to do a little research to find out exactly what does qualify as a meme. If you’re in the habit of reading our internet marketing tips, or you aren’t at all and just want to know what a meme is, I am passing my new-found knowledge onto you.

How do you pronounce it?

First let’s clarify how to say the word “meme.” It’s not “me-me” like Mariah Carey’s nickname. Meme is pronounced with a long “E” and rhymes with “theme.” Listen to this:

What is a meme?

According to Merriam-Webster the definition of a meme is: “an idea, behavior, style or usage that spreads from person to person within a culture.”  In today’s world of internet marketing a meme can be an image, video, link, hashtag, or simply a word or phrase. Successful memes spread like wildfire over the internet, increasing in popularity and putting the “viral” in viral video. The term comes from the Greek word “mimeme” which means “imitated thing.” You know, it’s probably easier to just show you.

In more recent years it seems that a new pops up almost daily. Are you familiar with Gangnam Style or the Harlem Shake? How about the most interesting man in the world or Grumpy Cat?

We could look at popular memes all day long. But since we’re supposed to be giving internet marketing tips instead, we’ll let you take a look at this infographic and move on to what memes mean for your business strategy.

Jumping on the bandwagon - er- memewagon?

Okay, so maybe I just tried to coin the term memewagon. Somehow I don’t think it will catch on. That’s the thing with memes. Some just work and some don’t. It’s hard to predict which ones will go down in history as the best memes ever and which ones will be epic fails, which is why your company has to be careful when deciding which memes to leverage in your internet marketing strategy.

When done correctly your company could experience some great benefits like a boost in website traffic, a temporary increase in interest of a product or service, or be seen as hip and cool among your target market. It could also backfire if you just look silly capitalizing on the meme, turning customers away because they see you as socially inept and outright ridiculous. So how might you effectively use a meme?

Hopfully you now have a little bit of background and more understanding of what a meme is. I know I do. And just for the record, even though us marketing geeks talk about things like memes at our get-togethers, we also talk about visiting the Guiness Factory in Ireland and how much we love Ruffles and onion dip. Besides, if we didn’t talk about memes then we wouldn’t have stellar internet marketing tips for you today.

Want to learn about 101 memes? Sing The Meme Song!